All kinds of Impact

I personally presented to a total of about 250 kids during November to promote the program. Most of the classes were strapped for time so we sang one silly song, read Bark, George by Feiffer, and then I told them about the party. 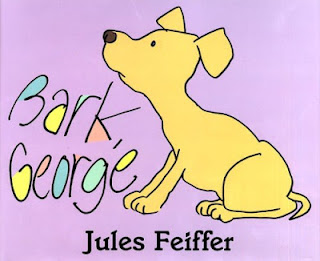 In one class, after we finished and I was packing up my stuff there was one little boy at the back of the room who was sitting criss-cross with his hands clasped in his lap. "I just really want to tell you a secret," he said to me, agonized. "Sure, come on up." I said, and bent over to his level. After he carefully and fastidiously parted my hair so that there was nothing in front of my ear, he whispered with great intensity, "I just love you SO MUCH."*

This month, my coworker was doing a search for a young boy. When she asked for his card, his dad joked, "We'll be back in three weeks then." I knew that the Kindergarten party was three weeks away, so I asked the boy if he was going to attend. He looked at me in that super-suspicious way that kids do when they suspect adults are messing with them. "How did you know that?" I said, "It was probably me who visited your class and told you about the party, what school do you go to?" After he told me what school and I knew that it was I who had visited I said, "Yeah! It was me who came to your class--don't you remember when we read Bark, George?" Friends, his whole face just lit up as soon as I mentioned Bark, George. "I know you!" he said with a huge grin.

I believe I made a difference in those kids' lives, however briefly.  I believe that Jules Feiffer himself would have been proud of how I hammed up the reading of his book. I believe that that book will have a special place in many of those kids' hearts from now on. I believe in what we do.