Show Me the Awesome--Diversity in Collection Development


As part of the fantastic "30 Days of Self Promotion" blog tour going on this month (full archive), I'm going to write about something very near and dear to my heart: Diversity in Collection Development.

Why Does it Matter?

I don't care how homogeneous, remote, or just plain 'white' your community is--you should be thinking about diversity in your collections, AND in the books you present during storytime. One of the biggest parts of our mission as librarians is to provide access. Access to technology, to ideas, to education and, more broadly, access to the amazing world we live in. We provide windows into other lives, other ways of living. And we also have a responsibility to show kids how much the same life is--how much we all have in common. It's our responsibility to reflect the diverse world back to our library users.

It's not for me to speak about discrimination or prejudice, or to try and tell stories that don't belong to me. But what I can do is listen to those in the know, and support and promote authors of color,  and use my purchasing power to encourage publishers to embrace diversity as well. I want to be a diversity ally, and I am challenging you to be the same.

What do I actually do?

Some things I read to learn:

What am I missing? I'm always looking for more! 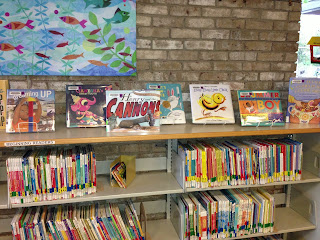 On a random morning I took stock of my picture book display and found 8/14 titles on display were either 1. A true story about a person of color 2. Featured a person of color on the cover regardless of the story or 3. portrayed a folk or fairy tale from a non-European culture. Most of the time I don't take a photo, just count how many books on the display are diverse, then count how many books are on display total. I aim for about 50% and am pleased to report that that is an easy benchmark to hit when you pay attention to diversity!

I highly recommend getting David LaRochelle to visit your school or library. He's great! 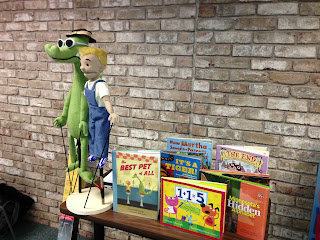 He talked a little about being an author, and read "The Best Pet of All." Then he told us about how a theater company had done a puppet show of "Best Pet of All" and sent him the puppets! 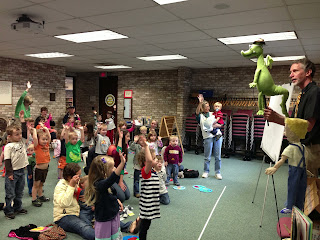 He even got the kids moving by playing follow the leader with the puppets. It was a hit! 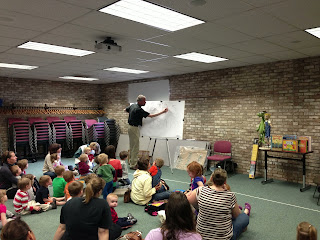 After that he drew us a hilarious story that he wrote, based on the numbers 1-10. Everyone was cracking up. Finally, he read "It's a Tiger" and talked about the process of making that story. It was such a treat to have him visit us. Not every author can do a great job with preschool age kids, but David's got it! 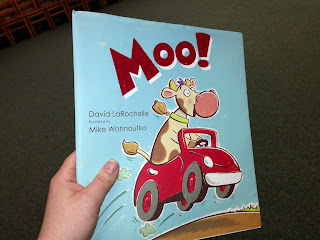 I even got a sneak peek of his new book coming out this fall with illustrator Mike Wohnoutka. It looks AMAZING and I'm sooooooo excited to read it in storytime.

Guess Who is Coming to Storytime This Week

You get three clues to try and guess who is coming to storytime for Children's Book Week. Who could it be?

1. An amazing pumpkin carver
2. Minnesota author
3. Latest book has a cowboy hat on the cover

4. I read one of this author's stories during "Pet" themed storytime.
5. This author has a book that goes backwards

Organizing Myself at Work


The change between being Youth Services Librarian/Assistant Director and working 45+ hours per week to working part time and splitting my hours between Children's Librarian and Reference Librarian has been pretty epic for me.


One of the biggest challenges was the way I work, and the way that I separate out my "personal" professional work from the work that is in my job description. Before, I didn't really have to think about it. Work was work was work, and it all took place in my office whether it was blogging, conference prep, book reviews, or employee evaluations. I was salaried, and I was there all the time. I used Outlook, Google Drive, and a giant desk calendar to organize everything, and it was good.  I didn't need to be mobile because I had one space to do all my work. Central command, if you will.

Then I moved and changed jobs, and was suddenly working at multiple desks with no spacious office, nowhere to put a giant desk calendar, no Outlook, and computers that won't even support Google Drive.

I was a bit at-sea. Here's what I've found to work:

It's a work in progress, but these are things that have helped me. What tools do you use to keep yourself organized?

Email ThisBlogThis!Share to TwitterShare to FacebookShare to Pinterest
Labels: how it works, jobs, professional development

When Spy Week ended at my library, I did some quick thinking and transformed the table into a Joke Station. I was inspired by April Fool's Day, but this is something that would work any time of year. 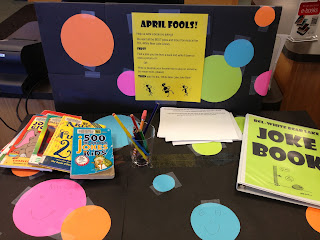 I left up the black paper, and just cut out some colorful circles. By the end of the month all the circles had funny faces drawn on them--an unintended result that was quite delightful.

Then I pulled all the library's joke books, and by the end of the month only one of them hadn't been checked out. Circ-booster!

I put out a binder with page protecters, and half-sheets that invited the kids to draw or write their favorite joke or trick.

Easy, simple, fun! I had about forty entries overall, and these were some of the first few entries:

I had a special guest star at storytime recently: a Marching Band!


I contacted members of a local high school marching band, and coordinated a visit to storytime. We did it on a day where there was no school, and the teens were able to get extra credit for visiting. I had about 15 band members visit with their instruments, and it was fantastic!

The parents LOVED it. The kids ended up loving it too, but many of them were very apprehensive at the beginning of storytime. Since the marchers were warming up, the room was very noisy before storytime, and there were a lot of unfamiliar faces at the front of the room. I offset this by
I did my normal opening song and our letter of the day with Fergus, then introduced the band. I had each of the teens say their name, what their instrument was called. Then the played a quick scale or rhythm to show what their instrument sounds like. Then I read Wynton Marsalis' "Squeak, Rumble, Whomp! Whomp! Whomp!" Each time I came to an instrument that was in the room, I paused and prompted the teen with that instrument to give us the 'real' sound. I talked about sounds a lot with the kids, specifically high and low sounds, and we practiced a lot of sounds as a group. 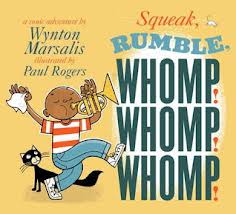 The trombone was particularly popular! But we did have to adjust our tape line to accommodate the reach of the trombone and make sure no littles were sitting right in the way. 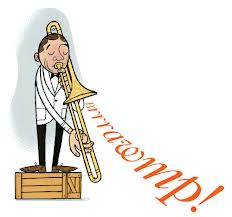 After that, the band played their school fight song, and "Happy and You Know It" and "ABC's" while we sang along.

Then, with the help of the drum we used our voices to make beats with the book "Tanka Tanka Skunk" by Steve Webb (a new favorite of mine). 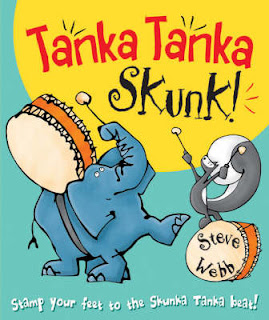 Then we added a new twist to our favorite storytime song of all, "The Watermelon Song" by singing it with musical accompaniment (I told the teens that if they didn't know Frere Jacques/couldn't play it they had to sing and dance with me).

And finally, we finished by reading, "Soon Baboon, Soon" by Dave Horowitz 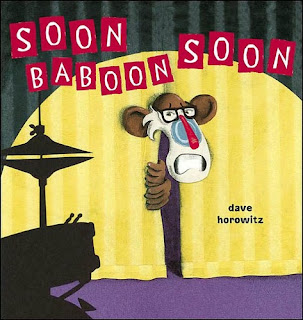 You may want to put up noise-level warning signs for patrons if you do this! My colleague also did a kazoo parade through the library when she did this, but that wasn't a great fit for my library (though it would have been fun).
Posted by Ms. Anna at 3:36 PM 2 comments: