I just checked  School Library Journal's Starred reviews for April, and was ecstatic to see that two of the books I reviewed were given stars! I'm as happy as if I wrote/illustrated the books myself.  But wait, there's more: I'm super excited to see a new Traction Man adventure as well.

If All the Animals Came Inside by Eric Pinder, illustrated by Marc Brown. 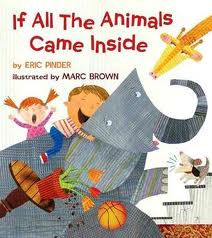 Great for storytime, this book is really something special. Marc Brown who is, of course, most famous for the Arthur books, combines that classic cartooning style with the more recent collage work seen in books like "Dancing Feet!" (Craig) and really creates art that is above and beyond anything he's done before. The emotion and expression from his cartoon work is perfectly enhanced by the texture and liveliness of his college work. It's amazing to see such a well-established illustrator evolve in such dynamic way.  Truly top form! (There's even an Arthur cameo on the page showing the animals watching television).

I'll Save You Bobo! by Eileen and Marc Rosenthall 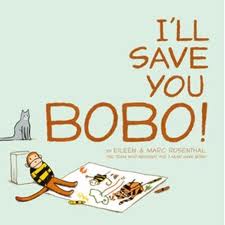 When I saw the first Bobo book at the bookstore, I fell in love. Poor Willy--his pesky cat Earl just won't leave his beloved monkey, Bobo, alone. In this adventure, Willy is annoyed both by his boring book and Earl's fascination with Bobo. Willy solves both problems by drawing his own stories--all of which pose a threat to Earl. 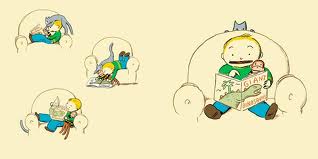 I just love love love the expressiveness of the art. So simple, but with such masterful use of line to convey the action and emotion of what's happening. You can practically feel that cat invading Willy's space and pestering him (but he's so charming, that Earl) 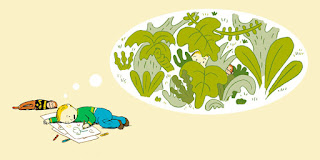 Look at the great composition of the image above. The curve of Willy's body makes a shallow arc, which is echoed both by Bobo's shape and the shape of Willy's imagination bubble. It's also reflected within the leaves of the imaginary jungle. Our eyes like this repetition of shape, and naturally bounce around the whole drawing, helping it appear lively and interesting. So good!
Traction Man and the Beach by Mini Grey 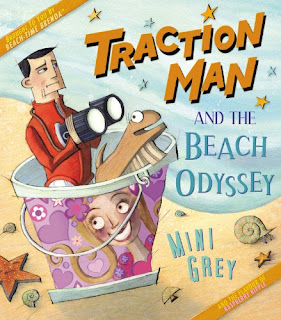 And finally, a shout-out to Traction Man. Traction Man is an action figure who has many heroic and harrowing adventures. Those who pay attention will find that his adventures seem to take place in locations common to young children--the bath, the sink, the backyard--but are transformed into Exciting! Dangerous! Missions! by the the child's imagination. I love the Traction Man books because I find them hilarious, but I also think they do a particularly great job of capturing what it's like to get really lost in your imagination. They do a great job of showing how a child with an imaginary superhero toy sees the world. And did I mention hilarious?
Enjoy!
Posted by Ms. Anna at 3:51 PM