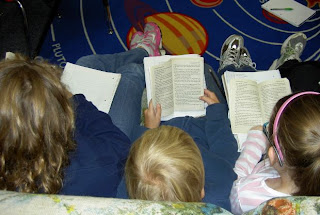 A few fifth graders came initially, but they quickly bowed to social pressure and stopped coming. We added some second graders and one first grader who the principal deemed mature enough. Then it became apparent that the kids weren't quite mature enough to eat anywhere but the cafeteria without leaving a big mess, so we shifted to one of the recess periods. Every week that I'm there the boys agonize over choosing recess (one of three) or Book Shorts, but often pick Book Shorts. I give the kids a piece of hard candy or sucker as they come in, and then I just read. We rarely have time to discuss beyond, "Did you like it?" but I'm ok with that. I think it's nice for them to do something during the school day that is just for pure enjoyment.
Posted by Ms. Anna at 2:30 PM