Flannel Friday-- A Good Day For a Hat 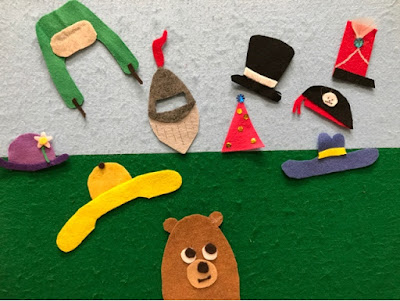 I don't make many flannels these days, but when I saw "A Good Day for a Hat" by T. Nat Fuller, illustrated by Rob Hodgson I knew it would be a perfect choice to extend with flannel. I don't have a template to share this time--I just cut everything freehand!

First off, who doesn't love a good hat storytime? So fun. (Head over to EverydayDiversity.com to find some inclusive books to add to your theme!)

For this one, I read the book and did the flannel at the same time. The book follows a simple pattern--Mr. Brown goes outside, but the hat he's wearing isn't right for the occasion.

"I have just the hat for that" Mr. Brown said.

But when he stepped outside... 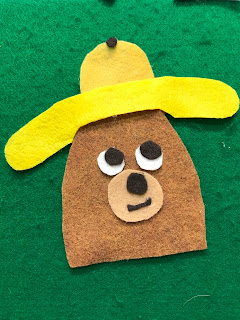 And the page turn reveals the next dilemma. So I have everyone chorus, "I have just the hat for that" while putting their finger up like they have an idea. Then I lower the book and put on the new hat. This allowed a natural place to add discussion. I would say things like, "And he put on a yellow rain hat! What else do you wear in the rain?" 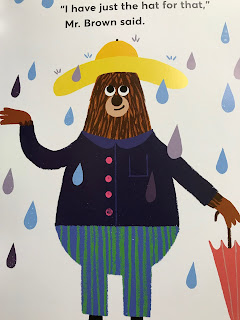 I didn't ask extra questions on every spread, but it still encouraged dialogic reading as kids saw the additional elements in the pictures and pointed them out, "He needs a trumpet!" called out one little storytimer when we got to the marching band spread. 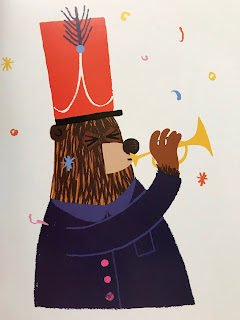 At the end, everyone loved it when he wore all the hats at once. After Mr. Brown is surprised, I tumbled all the hats to the floor--always a crowd pleaser. I love this flannel!

Flannel Friday is hosted this week by Jessica of Storytime in the Stacks. You can find out more about Flannel Friday, including archives, Pinterest boards, and a Facebook group over at the Flannel Friday website.
Posted by Ms. Anna at 2:43 PM No comments:

In Case You Missed It...

If you aren't aware of my other project, Everyday Diversity (see the tab below the header of my blog), I've started posting round-ups of new books that feature racial diversity and are good for storytime. You can read the first round up here

If I had my act together I'd have posted this last week, but I made a Summer Reading Hype video for Bryce's project to encourage library staff who are struggling to get through the constant onslaught of SRP. It's a cool project, and lots of fun stuff was made by librarians around the country, including yours truly.
Check it out here
Posted by Ms. Anna at 4:27 PM No comments:

This is one of my all-time favorite school-age programs. I've done it three times now over the past few years and it's always delightful.

And, even better, it doesn't take a ton of prep! I admit, it sounds intimidating, but I *promise* it's really super easy!

I usually advertise this program for kids in grades 3-6 on their own, or for families to participate together, and hold the program for an hour and a half. I invite adults dropping kids off to come back ten or fifteen minutes early, and then the whole group goes around and views all the machines and talks about what worked/what was a challenge for each machine.

Some of the STEM concepts that relate to RG machines that I focus on are chain reactions and potential versus kinetic energy.

3. Explain what the kids are going to do:
While kids are building, I go around and talk to them about their challenges, and use science words to describe what I see happening, "Oh, I like how you're using an incline to create friction and slow down the speed of the marble so you can control it's trajectory" kind of stuff. When they're having a hard time, I try to refrain from telling them what to do, but say things like, "I wonder what would happen if..." and "I notice that it seems to get stuck at that same spot every time" and let the kids keep figuring it out themselves (this can be hard).


Program Supplies:
Supplies vary—basically anything that you can think of; you don’t have to know how they will use it, you just need enough stuff to spark their imaginations and allow for variety. You don’t have to have ‘enough’ of everything except the bells since that’s the goal, and the rolling objects that make the machine work—golf balls and/or marbles. Basically you can just raid your supplies cabinet and put out a bunch of random stuff.
Must haves:
Scrap paper
pencils
Bells (one per kid/group; I just use the round craft bells in various sizes)
Golf balls (one per kid/group)
Marbles (Small dollar store marbles aren't heavy enough, but fine if you also have golf balls)
Dominoes (these get used a LOT, so this might be something you stock up on and/or limit)
Cardboard tubes
Cups of various sizes*
Lego*
*Even these supplies can vary; but you do need a lot of things to provide height and structure

DOES IT WORK?
Yes! You can see awesome machines created at one of my programs here, here, and here.